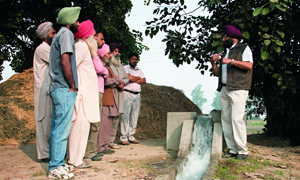 Nestlé is celebrating a century of deep engagement in a country which over that period has proven its potential to be one of Asia’s economic superpowers.

Nestlé’s first sales agents in India began work in Chennai and Kolkata in 1912.

Today, the company directly employs 6,000 people in India and more than half a million indirectly.

Its products are sold in more than 3.5 million outlets across the country.

Nestlé recorded sales of CHF 1.4 billion in India in 2010. Its most popular brands are Maggi, the country’s leader in instant noodles, and Nescafé instant coffee.

Nandu Nandkishore, Nestlé’s Executive Vice President and Zone Director for Asia, Oceania, Africa and the Middle East thinks there is much potential for further growth.

“India is a success story in the making,” he said. “It has a large, progressive population.

“Consumers trust our products for their high quality. Opportunities will continue to grow as more and more people want to buy nutritious, branded food and beverages.” 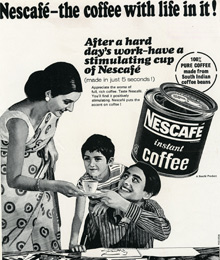 MOST POPULAR: Nescafé is the leading instant coffee in India.

Nestlé India has invested USD 500 million to increase its capacities over the last two years.

This includes CHF 70 million in a new manufacturing site in Nanjangud to produce Maggi products.

The construction of Nestlé’s eighth factory in Tahliwal, Himachal Pradesh, is progressing rapidly. Existing factory sites in Moga, Samalkha, Ponda and Bicholim are also being expanded.

Nestlé S.A. is investing CHF 50 million in a new research and development centre in Manesar, Haryana, which will become operational towards the end of 2012.

The majority of Indian women and children suffer from basic micronutrient deficiencies such as vitamin A, iron, iodine and zinc.

At the same time a large proportion of the population also suffers from non-communicable diseases such as obesity and diabetes.

Mr Nandkishore believes that tackling the double burden of under and over nutrition will make a positive impact on India’s productivity and that Nestlé has a role to play in this.

“Nestlé is an integral part of India,” he continued. “Our unmatched research and development capabilities have enabled us to create products which offer improved, affordable nutrition to consumers in all segments of Indian society.”

“With our expertise in science based nutrition, we can contribute significantly to improving Indian consumers’ health and wellbeing, as well as creating value for the economy.” 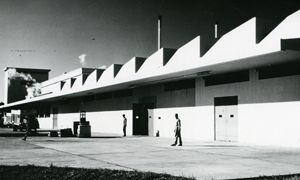 FIRST FACTORY: Nestlé built its manufacturing site in Moga in 1961.

Nestlé’s PPPs are smaller or ‘daily-portion’ packs designed to be bought on a regular basis. They are manufactured locally, using local raw materials to minimise value chain costs.

Nestlé India has a factory in Uttarakhand dedicated to PPP production.

Nestlé built its first Indian factory in Moga in 1961, developing milk production in the region. The company now has seven factories in the country.

Over the years, Nestlé has helped to develop the area around that first factory, setting up milk collection points and training farmers to improve productivity and quality.

The company’s agronomists provide farmers with technical support to improve sustainable water management, including help with irrigation and rainwater harvesting.

Nestlé India has built more than 160 drinking water fountains in schools near its factory in Moga, providing about 65,000 students with access to clean water.

The company has also improved the sanitation facilities in girls’ schools close to the factory to encourage young women to continue with their education.

These efforts are part of what Nestlé calls ‘Creating Shared Value’, an approach to business that aims to create value for shareholders at the same time as for those communities where the company operates.