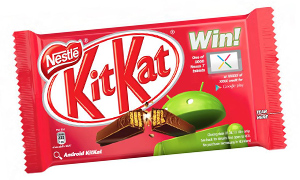 SPECIAL PRIZES: More than 50 million Android-branded KitKats will be available.

Google has ended months of online speculation about the name of the latest version of its Android mobile operating system by revealing it will be called ‘Android KitKat’, after Nestlé’s popular chocolate and wafer confectionery.

The creators of the world’s most popular mobile platform have teamed up with the world’s biggest food and beverage company to name the next release of the platform ‘Android KitKat’.

Android has been developed by the company’s engineers under sweet-themed names ever since the release of Android Cupcake in 2009 and continuing in alphabetical order until the most recent version, Android Jelly Bean.

The news that the letter ‘K’ will be dedicated to Nestlé’s KitKat will surprise most technology commentators, who had widely thought the latest version would be ‘Android Key Lime Pie’.

“We couldn’t imagine a better name for our Android K release than the tasty chocolate that’s been a favorite among the team since the early days of Android,” said Marc Vanlerberghe, Director of Android Marketing.

We’re excited to announce this partnership with Android, the world's most popular mobile platform, which will help us to enable even more KitKat fans to enjoy their break. Patrice Bula, Nestlé’s Head of Marketing.

“We’re excited to announce this partnership with Android, the world's most popular mobile platform, which will help us to enable even more KitKat fans to enjoy their break,” said Patrice Bula, Nestlé’s Head of Marketing.

“KitKat is one of the world’s top ten fast-moving consumer goods brands in social media in terms of fan numbers and engagement,” he continued. “We continue to build on its strong digital presence with interactive, creative branding campaigns.”

To mark the release of Android KitKat, more than 50 million specially branded KitKat bars will be available in 19 countries including Australia, Brazil, Germany, India, Japan, Dubai, Russia, the United Kingdom and the United States.

The packs will lead consumers to the website android.com/kitkat where they will have the opportunity to win prizes including a limited number of Google Nexus 7 tablets, and credits to spend in Google Play, Google’s online store for apps, games, music, movies, books and more.

A small number of Android robot-shaped KitKat bars will also be offered as prizes in selected markets. 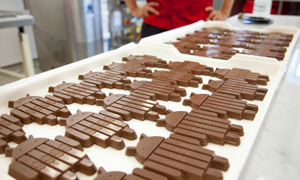 LIMITED EDITION: A small number of Android robot-shaped KitKat bars will also be offered as prizes.
Nestlé’s branding partnership with Google is the company’s latest move in its ambition to leverage digital technology and online content to get closer to its consumers to better understand and cater to their preferences.

Earlier this year, Nestlé acquired its first-ever piece of online content property, the Petfinder website in the United States. The online database, which links prospective adopters with adoptable pets, is visited by more than 100 million pet-lovers annually.


Indian consumers can look forward to exciting promotions that are planned specially for the India market.